She spun it around him effortlessly. Wrapping him in layers of gossamer and craft. Invisible fabric made of both seduction and death. She hardly remembered when  deception had required effort. She hardly remembered Prima’s lessons, weapons, role-playing or the burning in her veins as she inured herself to the poisons of this world. What you force from nature will be taken back thrice, she is reminded by a voice that she knows is not her own, a voice that is clearest when the triple moons rise and her blood surges painfully, a living memory always screaming.

She thinks once she was alarmed by this transformation, that a previous self was lost along this way. When in the grip of the triple moons debt extraction, she finds herself wandering through the corridors of her mind searching for a missing pair of glasses. Where there were once ghosts that whispered, there are now only shadows and the feeling of a mother lost just around the bend.

“Are you in need child?”

She marvels that he cannot see the gossamer threads nor feel the manipulation of his mind and senses. Marveling most of all at his innocence. What would it be like to live unconnected to the power of the world, to the power of the dark she asks the voice not her own.

The world of light isn’t as bright as it first seems, you are learning the ways of the dras. You see a beauty that so few can.

She does see the breathtaking depth of a moonless dark, the purple edges of wings unfurling and the sighs of a green sea lapping against obsidian sand.

“Child, are you in need?” he asks again.

“Not any more,” she says, murdering him with a breath.

She is nearly complete, and though a goddess made is less powerful than a goddess born, she will be powerful enough for what her maker has in store.

Inspired by Trifecta’s word of the week:

2 a :  an occupation or trade requiring manual dexterity or artistic skill <the carpenter’s craft> <the craft of writing plays> <crafts such as pottery, carpentry, and sewing>

b plural :  articles made by craftspeople crafts> <a crafts fair>

3 :  skill in deceiving to gain an end <used craft and guile to close the deal>

My Fantasy Excerpt Published Alongside These Other Wonderful Authors!

For Sale! Both on Amazon and at Smashwords 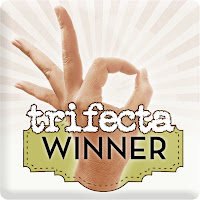 People With Whom I Write